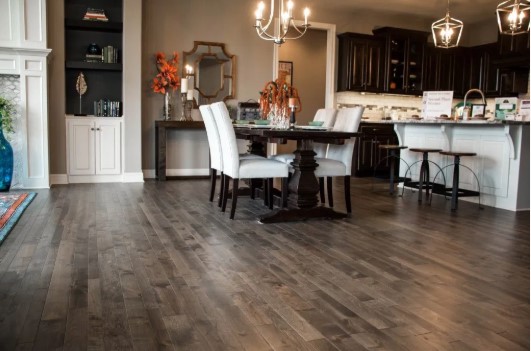 The town of Copper Canyon has some very luxurious houses, and we here at Texas Hardwood Flooring usually find ourselves putting in very high end hardwood flooring products: fancy stuff like solid Brazilian redwood, koa, and other exotics. But in this case, we had a customer who had a separate building on the property that could be described as a pool house or guest house. (It had actually been used as both, as well as a “work-at-home” space on occasion.) The kids called it the party house.

Hardwood Flooring in “The Party House”

The extant flooring in this little house was a mixture of worn-out carpet, tile, and a laminate product. It was a patchwork of styles and not very attractive. In addition, because of the way this space had been used, there was lots of damage done to the floor and there would probably be a lot more damage to come in the future. Folks entering were coming from the pool or often from walking in the woods, so frequently would be tracking in dirt, pebbles, water and the like. All of this detritus is not very friendly to any wood floor (especially a cheap, poorly manufactured one), but Marty didn’t like the idea of tile or marble in the main space of the guest house. She wanted wood of some kind. But she was sure she didn’t need any kind of “extravagant” flooring. She went to a local big box hardware store to scout some options. She found a color and style that appealed to her. That’s when she called us.

Jesse here at Texas Hardwood Flooring got Marty a really good deal on a nicely manufactured but relatively inexpensive engineered hardwood floor that was in the same ballpark as the one she saw at her store. It was a basic three-inch wide engineered wood. The “real wood” veneer was a good thickness, allowing for lots of wear-and-tear that would be anticipated in the future. It was the ubiquitous red oak that you find around North Texas so often, with a very light stain on it. A robust plywood base and adhesive made for a quality product. On top of that, the aluminum oxide surface put on at the factory would prove to be sturdier than a stain and polyurethane surface that a non-premade wood would carry.

The THF Copper Canyon crew delivered the wood, then tore out the old floor. They scraped and prepped the concrete subfloor, making it ready for the installation. After that, the guys laid out the new floor in a pleasing pattern, and then glued this engineered hardwood to the subfloor. They were especially careful to create sturdy and seamless transitions at the front doorway and to the tiles that were in the bathroom and closets. A shoe mould was nailed down over all the spaces where the floor needs room to stretch and shrink with the seasons and weather.

It only took a couple of days for the whole job, and Marty was very happy with the final look. All in all, another successfully installed engineered hardwood installation from one of the Texas Hardwood Flooring crews.