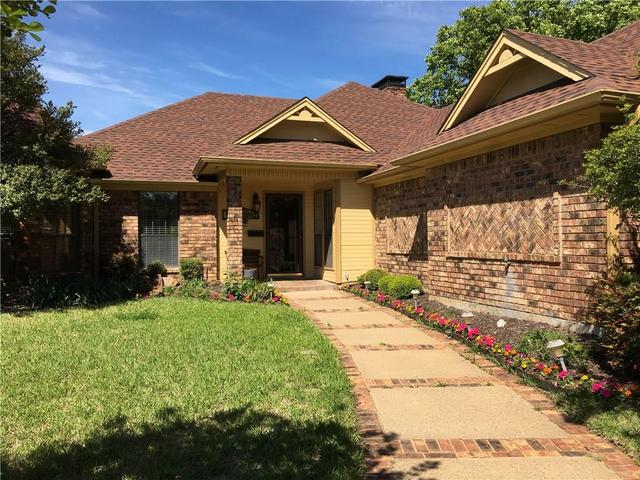 Eileen and Jim have an extremely large home in Trophy Club, Texas. They live in that city because it provides quick access to Jim’s office via Hwy 114, and Eileen can play golf every day the weather permits (Jim can, too, actually). After golf, they like to relax in their pool. Recently, however, Eileen noticed that the pool house, where she liked to change clothes, had extensive damage to the carpeting that covered the main living part of the house. Feeling sure she could get a better floor, she called Texas Hardwood Flooring for assistance.

Our project manager looked at the situation with both Eileen and Jim, and recommended some combinations of wood and tile floorings that Texas Hardwood Flooring could expertly install for them. He suggested that the floor nearest the entrance to the pool should be some kind of tile, and that it should run to the bathroom and changing rooms that were on the left. The rest of the floor could be a nice and sturdy, but reasonably priced, engineered hardwood that would host the couches, easy chairs and luncheon table that were on the right side of the pool house.

Eileen found the wood she wanted right away: Arctic White Oak from the Architexture Collection that Mohawk manufactures. Its color struck her first; so fitting for a “cool pool” space. Then, she read a customer review saying that the floor had a natural feel to it and was not slippery, which she liked for a pool house. After that, she and Jim chose a similarly colored (Arctic White) and textured ceramic tile that was also similar in thickness, available from a local tile manufacturer named Daltile.

After pulling the carpet, the experienced Texas Hardwood Flooring crew that covers the Trophy Club, Texas area, discovered that some mold had grown underneath it, and that had created some holes and gaps in the concrete subfloor. The floor had to be cleaned and leveled for a proper glue-down installation to occur. This took a couple of days to allow for the moisture to disperse. The tile was put in first because the moisture issue is not as big of a deal with that sort of flooring.

When the floor was sufficiently dried, the crew laid out the seven-inch wide Mohawk flooring pieces, and staggered them into a pleasing pattern. Then, the massive buckets of Bostik adhesive were brought in, and the hardwood flooring planks were properly adhered to the subfloor.

When it was finished, this floor, in coordination with the extremely light-colored furniture, had an extremely distinctive look. “Like a polar bear in a snowstorm,” said Jim, laughing. “Just what I wanted,” said Eileen. It is an unusual look but it made the customers happy, and hopefully the future swimmers and partiers who spend time in this mini-house will feel the same! Texas Hardwood Flooring says thanks for the opportunity to service Trophy Club once more!