New Texans in Mansfield Get a Great New Floor 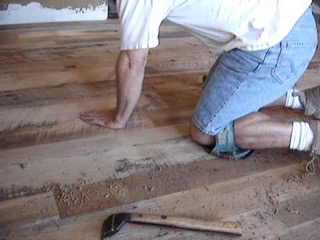 Joan and Dick moved to Mansfield from Connecticut. They decided they wanted to plunge right into becoming Texans. To them, this meant buying a house on the “edge of civilization,” as a smiling Dick put it, although it was only a couple of miles from downtown Mansfield. They were on a five-acre lot, and surrounded by trees. The house was only fifteen years old, but externally it had a rustic look, similar to an old ranch house, and they wanted the same feel on the inside. So they decided the first thing that had to go was the beige carpeting, which looked like it belonged in a boring office park waiting room.

Joan got the name of Texas Hardwood Flooring on the advice of a neighbor and called us. She spoke extensively with Brian and Jesse about what they wanted to do when it came to a new hardwood floor installation. It turned out that the couple had never heard of hand-scraped floorings options before. When it was explained, and when they saw pictures, they knew this is the direction they wanted to go in the main living area of the house.

They chose a standard three-inch wide and three-quarter-inch thick red oak, which tends to be an economical choice in the North Texas area. The subfloor is concrete, so the new red oak needed a new subfloor. The crew came in and tore out the existing carpet, of course, and had it carted away. Then the concrete was covered with poly sheeting for moisture protection (the biggest threat to wood floors, of course, is water). Following that, the team installed a new subfloor – these were ¾” plywood sheets fitted wall to wall. This gave the flooring installation crew the ability to nail down the red oak planks; some of the doors had to be adjusted slightly because the new floor was now an inch and a half taller than it was before.

A week or so was allowed to pass for the wood to adjust to the atmospherics. Subsequently, the Texas Hardwood Flooring artisans came back and hand-scraped this new floor installation, giving it a rough-hewn texture that calls to mind “days of yore” in the couple’s new home state. This is a painstaking technique, but esthetically worth it. This was quickly followed by the application of a stain, in this case a Duraseal “Rosewood,” a medium dark color. And, of course, several coats of oil-based polyurethane to seal the wood and stain were brushed on.

Dick and Joan were delighted with their new floor, and eagerly placed the Eames chairs and leather sofas in this exquisite redone living room. They thanked Texas Hardwood Flooring effusively for the kind of design solutions that they wanted so much.  Welcome to Texas, folks!